CONSTITUTION OF THE PAPILLION GUN CLUB

The name of this organization shall be The Papillion Gun Club, Incorporated.

ARTICLE II – PURPOSE OF THE ORGANIZATION

ARTICLE VII – DISMISSAL OF MEMBERS AND REMOVAL OF OFFICERS

All meetings will be conducted using Roberts Rules of Order.

In the event of dissolution of the Papillion Gun Club, the Board of Directors shall, after paying and making provisions for payment of all liabilities of the Organization, dispose of all assets of the Organization exclusively for the purpose of the Organization in such a manner, or to such organization operated for similar purposes as shall at the time qualify as an exempt organization under section 501 C(3) of the Internal Revenue Code of 1954 (or the corresponding provision of any future United States Internal Revenue Law), as the Board of Directors determine. Any such assets not so disposed of, shall be disposed of by the District Court of Sarpy County, exclusively for such purposes, or to such organizations as said Court shall determine. 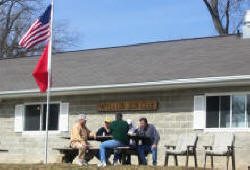